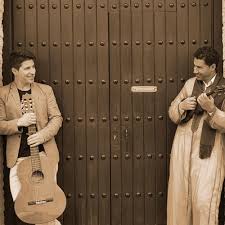 In the same way that the blend of couscous spices surrounds us with its exotic fragrance and exquisite flavour, CusCus-Flamenco´s music fills us with enchantment and mystery, sentiment and spirit.  CusCus Flamenco is a cultural encounter where art flows in its maximum capacity, bringing out the best of each tradition through a musical language that has neither barriers nor frontiers.

CusCus Flamenco is led by singer/violinist Hamid Ajbar, originally from Morocco, but based in Spain for over twenty years. He grew up in a musical environment in his hometown of Chefchaouen, which boasts a direct legacy of Andalusian music, transmitted through generations ever since the expulsion of the Muslims from Spain.

Alberto Funes is a flamenco singer from Granada who was one of the first to graduate in the Cristobal de Morales Conservatory of Seville under the modality of flamenco song. He continued his studies with El Pele, Paco Taranto, Marina Heredia and Calixto Sanchez, amongst others, and has taken part in many festivals and events worldwide, including the Flamencura Festival in Moscow, the Biennale in the Netherlands and others.

Irene La Serranilla was born in Madrid. From a young age she studied flamenco dance, and continued her studies in Granada and Seville, where she learnt from some of the best masters, including Juan Amaya, La Farruca, Patricia Guerrero, La Moneta and Manuel Liñan. She has been dancing in the best “tablaos” in Madrid and Granada for over eight years. Her style of dancing is both traditional and expressive, and she teaches flamenco dance in her own school in the traditional Albaycin quarter of Granada, placing the main focus of her classes on the comprehension of the language of flamenco as an art form, and also the pleasure of dancing.

Lolo de la Encarna was born in Granada, and obtained a degree as a teacher from the University of Granada. He started to play flamenco guitar at the age of eight. He studied with renowned guitarists Luis Mariano and José Jiménez “El Viejín”, and also took courses with Rafael Riqueni. Lolo has accompanied a number of artists both from Granada and outside the province.