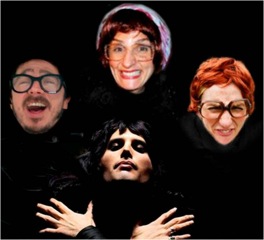 Religious identity, forbidden familial and sexual relationships, betrayal and the power of gossip are all showcased through parody and popular music! The show not only satirises the extremes of Jewish life, but also the role of musical theatre itself. Debra Tammer was inspired to write the play after watching the ITV documentary Strictly Kosher. Marrying together the seemingly unrelated worlds of Queen songs & popular music with the story of Orthodox Jews from Manchester may seem left of centre, but Debra knew it would be worth it’s weight in comedy gold.

The work-in-progress of the play was the one-to-watch show as part of the Camden Fringe Theatre Festival in London 2014 and sold out every night.