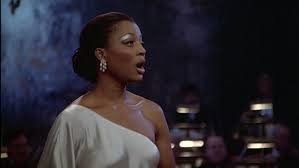 A young Parisian postman, Jules (Frederic Andrei), is obsessed with classical music and becomes entranced with the voice of American diva Cynthia Hawkins (Wilhelmenia Wiggins Fernandez). She doesn’t believe in being recorded, but Jules secretly records one of her performances.

His recording gets mixed up with another tape that has the recorded testimony of a prostitute, Nadia, which reveals that an important public figure is also the boss of a drug trafficking and prostitution racket.

Jules is now in danger from underworld enforcers and is also being sought by two Taiwanese men (who want the Hawkins tape). Somehow he must find a way to get himself out of the situation alive.

Programmed and introduced by Lee Broughton. The screening is kindly supported by the Leverhulme Trust