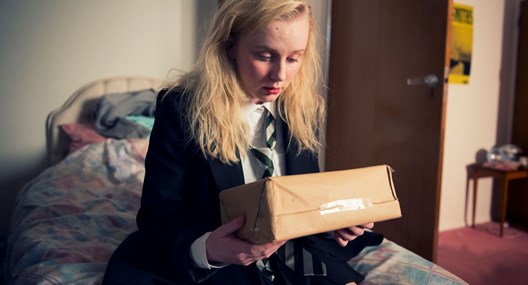 Our Short Film Audience Award has quickly become a favourite over the past few years.

The idea is really simple: we show you an eclectic mix of films from around the world, that are under fifteen minutes in length and you cast your vote to decide on LIFF’s Short Film Audience Award winner.

VITAMIN C
Two young girls collect items for a charity raffle, but they’re really spending the profits on what they love the most- Vitamin C effervescent tablets. When an elderly lady clocks on to their scheme, a game of blackmail begins.

EINSTEIN ROSEN
Summer of 1982. Teo claims he has found a wormhole. His brother Óscar does not believe him – at least not for now.

STICKY
Growing up on an 80’s Sheffield housing estate, 15 year old Karen spots a new postman delivering to her street and conceives a plan to gain his attention. But as her obsession grows, she begins a bizarre ritual which draws her into a vivid fantasy world, in this delightful and funny suburban tale of teenage lust, parcels and chewing gum.

JUST GO!
A young man who lost both his legs in a childhood accident comes to the rescue of the girl he loves when she has her bag stolen.

YOU’VE MADE YOUR BED, NOW LIE IN IT
Aksel is renowned for his ability to predict the future. Suddenly he gets a vision the elderly farmer Knut will die in three days. When he tells Knut of his fate, the old man initiates a mission to save the farm from falling into the hands of his annoying brother.

WAVE
A man wakes from a coma speaking a fully formed but unrecognizable language baffling linguistic experts from around the world.

STAMPS
A fascinating portrait of one man’s passion for collecting stamps, which has even landed him in a North Korean Jail.

COLD STORAGE
As a lonely ice fisherman discovers his frozen prehistoric soul brother in the ice, multiple levels of time and reality blend together into a cinematic and kinetic exploration of alienation, dependency and friendship. Cold Storage is a short dance film that pays homage to the virtuosic performances and melancholy comedy of the classic silent screen.

Free event. Please book by following the link below.