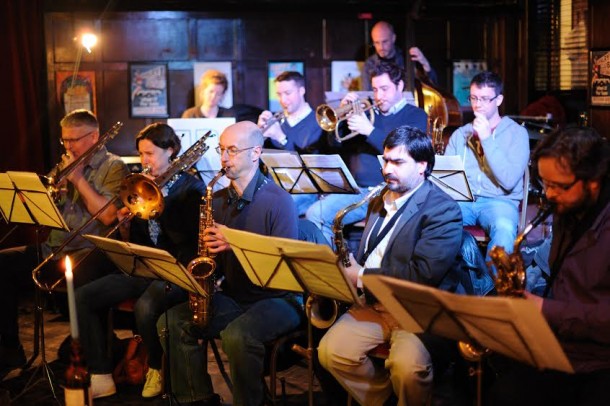 A very special event as we welcome a fabulous line-up of jazz talent. Playing all original music, French Horn player Jim Rattigan’s 12 piece ensemble Pavillon will take us through two sets combining fantastic musicianship and improvising by some of the most highly-respected names on the UK and international jazz and improvised music scenes. If you like the music of Gil Evans and Mike Gibbs, you’ll love this!

The group exclusively plays Jim’s compositions and features some of the most exciting and in- demand instrumentalists in the UK. This is a dynamic ensemble, which is the result of a highly creative line-led by Jim Rattigan on French horn. Jim (who operates at the highest level in both the jazz and classical worlds) has performed all over the world both as a jazz soloist and as a band member of various groups with such greats as Michael Brecker, the Charlie Haden, Carla Bley, McCoy Tyner, Django Bates, Kenny Wheeler, Brad Mehldau, Mike Gibbs, Steve Swallow and Bill Frisell.

Jim formed “Pavillon” in 2000 and in 2011 they recorded “Strong Tea”. Jim studied French horn at Trinity College of music and the Royal Academy of music in London. While a student, he was a member of the European Community Youth and Jazz Orchestras. On leaving college he embarked on a freelance career working with all the major London symphony orchestras, chamber orchestras and small ensembles. He joined the Royal Philharmonic Orchestra where he was a member for six years. During this time he also worked with the Bobby Lamb / Ray Premru Big Band and played on the Mike Gibbs album ‘By The Way’.

… a brilliant and versatile jazz soloist on French Horn and an interesting and questing composer / arranger” …. Ian Carr, Rough Guide To Jazz