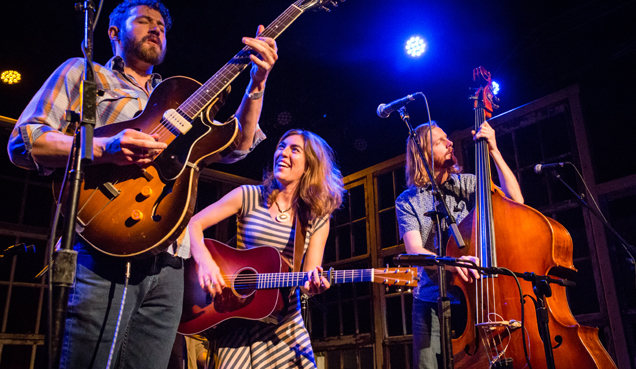 We are so glad to be able to bring the fantastic Stray Birds to Leeds Seven. They’ll be appearing in their full 4 piece US format.

Since taking America by storm in 2013 they have gone on to win a huge fanbase following triumphant appearances at big festivals around the world such as Celtic Connections, Cambridge Folk Festival, MerleFest and Tønder.

They continued to build their UK fanbase in 2016 with a tour of sold-out shows and ended the year on a high being voted Band of The Year in the annual Readers’ Poll at AmericanaUK where they also took the Album of The Year award.

” One track in and I’m sold, sucked in by the high wailing vocal harmonies straight out of the mountains and overlaid on a bed of solid rock. “Shining In the Distance” is as good an example of roots music I have found recently ”

“The cool thing about The Stray Birds is that they balance the roots well enough to hide them. Every song is fresh and my favorites (“Shining In the Distance,” “Radio,” “Fossil,” “Somehow,” “All the News,” and “When I Die”) are as good as it gets. Yep Roc signed these guys. Doesn’t surprise me a bit. One of the best labels going.”

Shining In The Distance – www.youtube.com/watch?v=jk14ju7hDNw

Third Day In A Row – www.youtube.com/watch?v=_X6bN-lMK3k